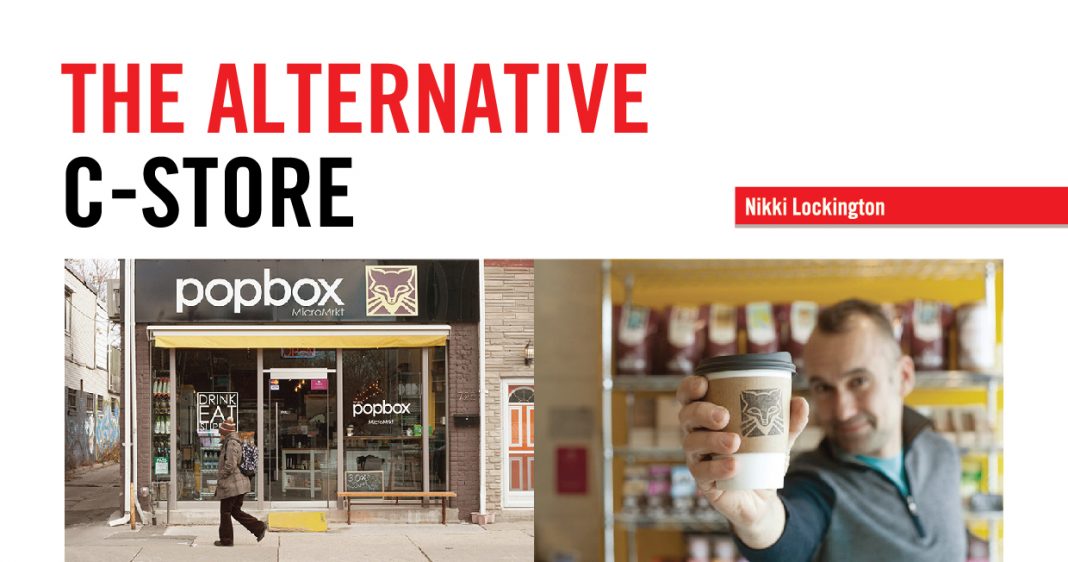 When you walk into Popbox MicroMrkt at the intersection of Dovercourt and Bloor in downtown Toronto, you’ll notice something’s different. It’s not quitae a convenience store, a coffee shop, a health food store and it’s definitely not a grocery store. It seems to exist in a space somewhere between all of these well-known models.

That was the goal, says owner Attila Szanyi. Before opening in April 2015, Szanyi and his business partner began to look at the convenience store experience in the downtown core. “So many stores operate under a tired model but they’re ever present on the landscape. The average corner store in the city is incongruent with where the food and lifestyle trends are going in the population.

“We wondered, can we do this model but with healthier foods? It’s really in the space between health food store and your neighbourhood 7-Elev- en,” he says.

Popbox MicroMrkt is about one-third café, and two-thirds retail, which Szanyi calls the defining feature of their offering.

“We have coffee, fresh foods, pastries, and grab-and-go salads that really drive a lot of traffic in the mornings and afternoons, and then we find it switches over more to grocery in the evening as far as revenue is concerned.”

But the products on the shelves aren’t products you’ll find in many other spots around the city. The standards of the food is different, he says, noting that they offer premium products, causing a lot of their customers to refer to them as a tiny Whole Foods.

In addition to the café and fresh-food offering, there’s also artisanal chocolate and sodas, Kombucha, organic meat, healthy snacks, and a variety of organic, raw, vegan and gluten-free options.

“We are known for a very selective and curated offering of food, so things you won’t find commonly at Shoppers or Loblaws, and that’s more and more the direction I enjoy going in with our offering because our customers seem to respond well to it,” he says. “That’s what drives me. I enjoy working really hard to find the most interesting stuff coming up. We’re really on top of the food trends. I think of that as my real job.”
Sourcing the products they carry is a lot of labour. They work with 55-60 different vendors, some of which deliver weekly. But, there are many
products that they get straight from the manufacturer; the people who are designing it and making it locally. “That’s where the real work comes in and that’s when I realized why what we do is not commonly done. You have to

If you’re going to freshen up your offer, you’re going to have to come to terms with some wastage. “I learned why the existing convenience store model is so prevalent, and it’s because everything is shelf stable. There’s a lot of spoilage in our model. Some of our top sellers, like unpasteur- ized cold pressed juices have a three-day shelf life and they’re also quite expensive, so loss is costly. Shelf life has to be managed carefully and constantly,” he warns. But the bottom line is this: you have to have products on your shelf. Empty shelves aren’t worth it.
push hard, go deep and maintain on a weekly basis.”

“You have to have the product available to the customer. There’s a certain aspect to the draw a product has, so it might be a loss leader – for example we don’t make profit on sandwiches when all is said and done – but the reality is that the customers who buy those sandwiches also buy some groceries that are more profitable for us. You really have to gauge that. I really try not to shy away from a small amount of wastage. You need to have products on the shelf and sandwiches in the cooler.”

The Opportunity of Marketing

If you’re walking down Bloor or Dovercourt, you might just run into an attractive sign urging you to stop into Popbox for what they have on offer that day.

“There is a certain amount of new customers every single day who find us because of our signage or they come across us online. Signage has been really effective for us. We have a few A-frame signs with attractive graphics on them to pull in one or two new people every single day. That has a lot of value when you’re dealing with a local population and only a certain number of those people are daily customers. We have a very dependable daily cycle of regular customers, but you need those new people every day.”
Popbox is on Instagram and Facebook. However, just being there is not enough. Szanyi explains that success means using social media in an interesting way.

“Instagram is the social media platform that I find is most conducive to food. Something that’s been really great is that we’ve made a lot of