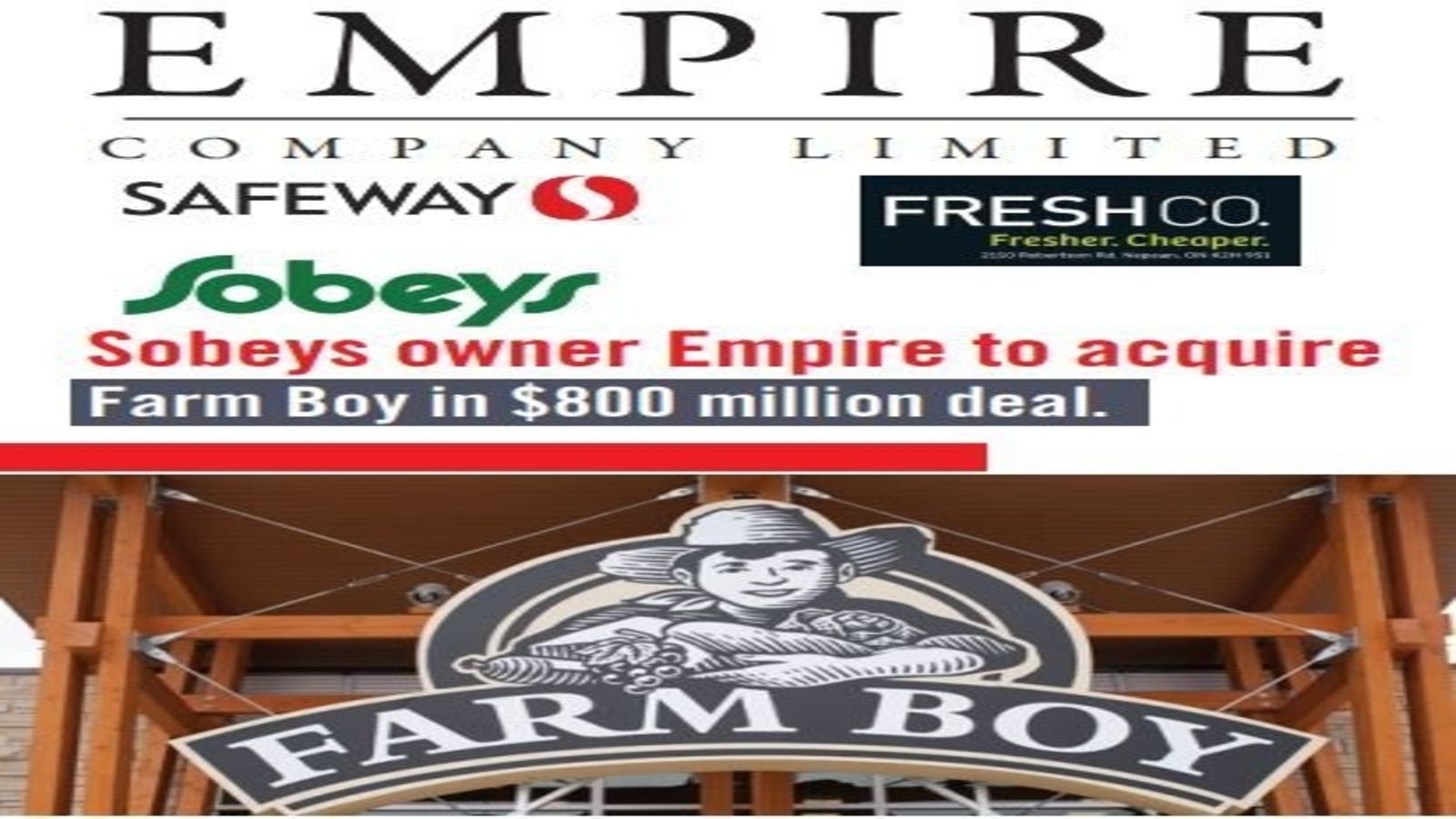 SOBEYS OWNER EMPIRE CO. LTD., HAS ANNOUNCED IT IS ACQUIRING FARM BOY IN A BID TO EXPAND ITS REACH IN ONTARIO. EMPIRE SAYS THE ACQUISITION, WHICH VALUES THE ONTARIO-BASED CHAIN OF GROCERY STORES AT $800 MILLION, INCLUDES 26 FARM BOY LOCATIONS IN THE PROVINCE.

“Farm Boy is a superb strategic and financial acquisition,” says Michael Medline, president and CEO of Empire. “It strengthens our reach in the key Ontario and GTA markets, it will be a growth vehicle in urban and suburban markets, and it’s very strong private label program will bolster our Ocado-driven e-commerce business. We believe we will be able to build on their historical industry leading same-store sales growth of 5.3% and five-year EBITDA CAGR of 21 per cent to double the size of the business in the next five years.”

In an interview with the Globe and Mail, Medline said the company will do things differently with Farm Boy than it did with Safeway.

“I don’t want any change to Farm Boy other than if we can assist them in growing faster,” Medline said of the deal, which was unveiled on Monday morning and internally dubbed Project Fastball, after the CEO’s love of baseball and the two initials in Farm Boy, according to the Globe and Mail report.

Farm Boy’s Founder and co-CEO, Jean-Louis Bellemare, who opened the first Farm Boy grocery store in Ottawa in 1981, and Jeff York, who has been co-CEO of Farm Boy since 2009, will continue in their roles for the long-term, managing the business separately from Empire’s broader operations and reporting directly to Empire President and CEO, Michael Medline. The co-CEOs of Farm Boy will ramp up expansion plans and continue to cultivate Farm Boy’s unique and compelling brand.

Rollout of the Farm Boy concept in the Greater Toronto Area (GTA) and continuing the existing expansion plans in southwestern Ontario will be early priorities through a combination of new site builds and conversions of some existing Sobeys locations, said Empire in a statement. As well, Farm Boy will boost Empire’s GTA penetration by adding their exceptional private label products to Sobeys’ new Ocado-based e-com- merce business, the world’s most advanced online grocery platform, which will launch in 2020 in the GTA.

Farm Boy co-CEO Jean-Louis Bellemare says “as you prepare for the next phase of growth, you don’t just team up with anyone. Empire understands what it will take, shares our vision for the brand, and in president and CEO Michael Medline, and CFO Mike Vels, we have access to executive leadership with deep experience in making acquisitions like this successful. We had many choices, but our trust and confidence in Empire and its dedication to our brand and its growth made this the perfect partnership.”

Farm Boy co-CEO Jeff York describe the Empire acquisition of the chain as an “extraordinary opportunity,” adding that Farm Boy will strength- en the Farm Boy brand, starting with urban and suburban markets in Ontario and eventually rolling out to other areas of Canada. “We are particularly excited by the eventual reach of the Ocado e-commerce platform and can’t wait to showcase our high-quality, local products to many more Canadians.”