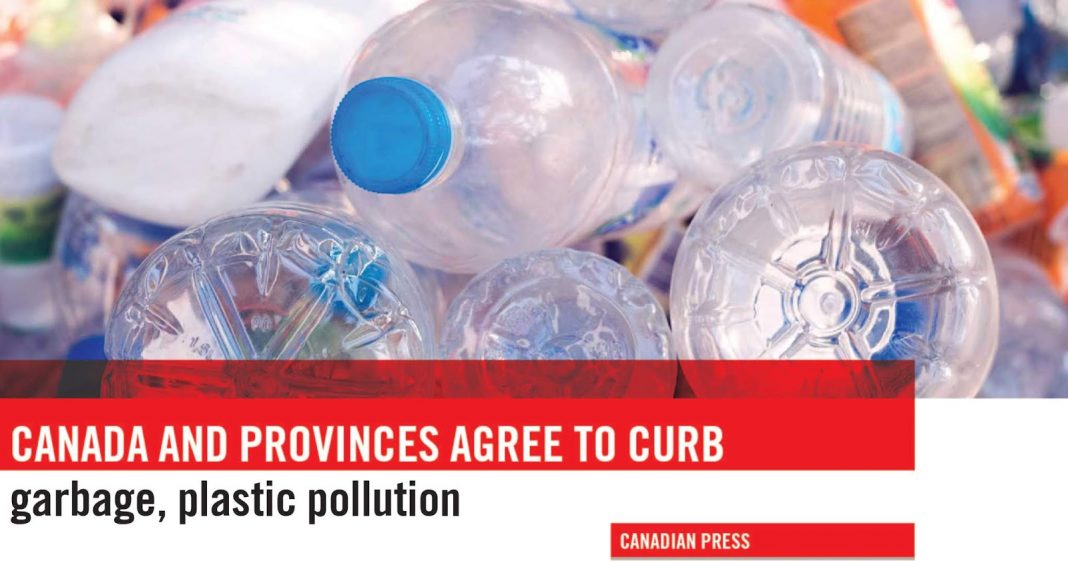 Canada’s environment ministers want to cut in half the amount of garbage this country produces, in a little over two decades.

By 2030, they want to reduce the total amount of waste Canada throws out by 30 per cent; by 2040, they want to cut the quantity by 50 per cent. And as part of a national strategy to curb plastic pollution in particular, Ottawa and the provinces unanimously agreed to work on a plan to have Canada produce no waste plastic at all.

Much tthe garbage Canadians send to landfills and incinerators, after recycling and composting and all the other forms of diversion, is plastic.

“Plastic pollution, as we all know is a major challenge for the health of our oceans, our lakes and our rivers,” said federal Environment Minister Catherine McKenna, speaking to reporters after the two-hour teleconference with her provincial counterparts.

The meeting was supposed to be held face to face in Ottawa but was downgraded first to a video conference and later a conference call. Federal officials cited scheduling conflicts that kept some ministers from being there in person; behind the scenes, the tension between Ottawa and some provinces over carbon pricing is said to be a factor.

McKenna said the focus of the meeting was plastics, not climate change, and said she was glad that the ministers could put other differences aside to find agreement on something else.

“I was just really pleased to see today that provinces, despite where there may be other areas where we don’t necessarily agree, that we can all agree that plastics is a huge problem,” she said.

Canada is trying to be a leader in curbing humanity’s plastics addiction. At the last G7 leaders’ summit it convinced five of the seven biggest developed economies in the world to sign a plastics charter, pledging that by 2040 all plastic produced in those countries will be reused, recycled or burned to produce energy. (The United States and Japan stayed out.)

The proliferation of single-use plastic packaging like water bottles, drinking straws and food wrapping is sending massive amounts of plastic to landfills. More blows into waterways and drifts to the sea. Giant reefs of plastic are showing up in the oceans and fish and sea mammals are eating plastic objects thinking they’re food.

Earlier this week, a sperm whale washed up dead in Indonesia and was found to have six kilograms of plastic waste in its stomach, including 115 plastic cups, a plastic grocery bag full of string and two flip-flops. What killed the whale is unknown because it was badly decomposed.

The lack of proper waste management in developing nations is behind much of the plastic that ends up in the oceans but Canadians are not great at recycling despite the curbside recycling systems in most cities. Only about 10 per cent of the plastic Canadians buy gets recycled.

In 2014, the average Canadian threw away 706 kilograms of garbage.

A final national plastics strategy is still in the works but the ministers agreed to require that plastic products sold here be easier to reuse or recycle, and to introduce producer-responsibility systems to make the companies that sell products wrapped in plastic more responsible for ensuring they get recycled.

McKenna said Canada is slightly above average when it comes to recycling but is nowhere near good enough.

“The reality is we have a ton of work to do,” she said.

Environment groups think this agreement is not the ton of work that is needed.

“How many more whales full of single-use plastic trash need to wash up on shores around the world before our minister of the environment and climate change takes strong action to help curb the excessive production of throwaway plastic?” said Sarah King, head of an oceans and plastics campaign for Greenpeace Canada.