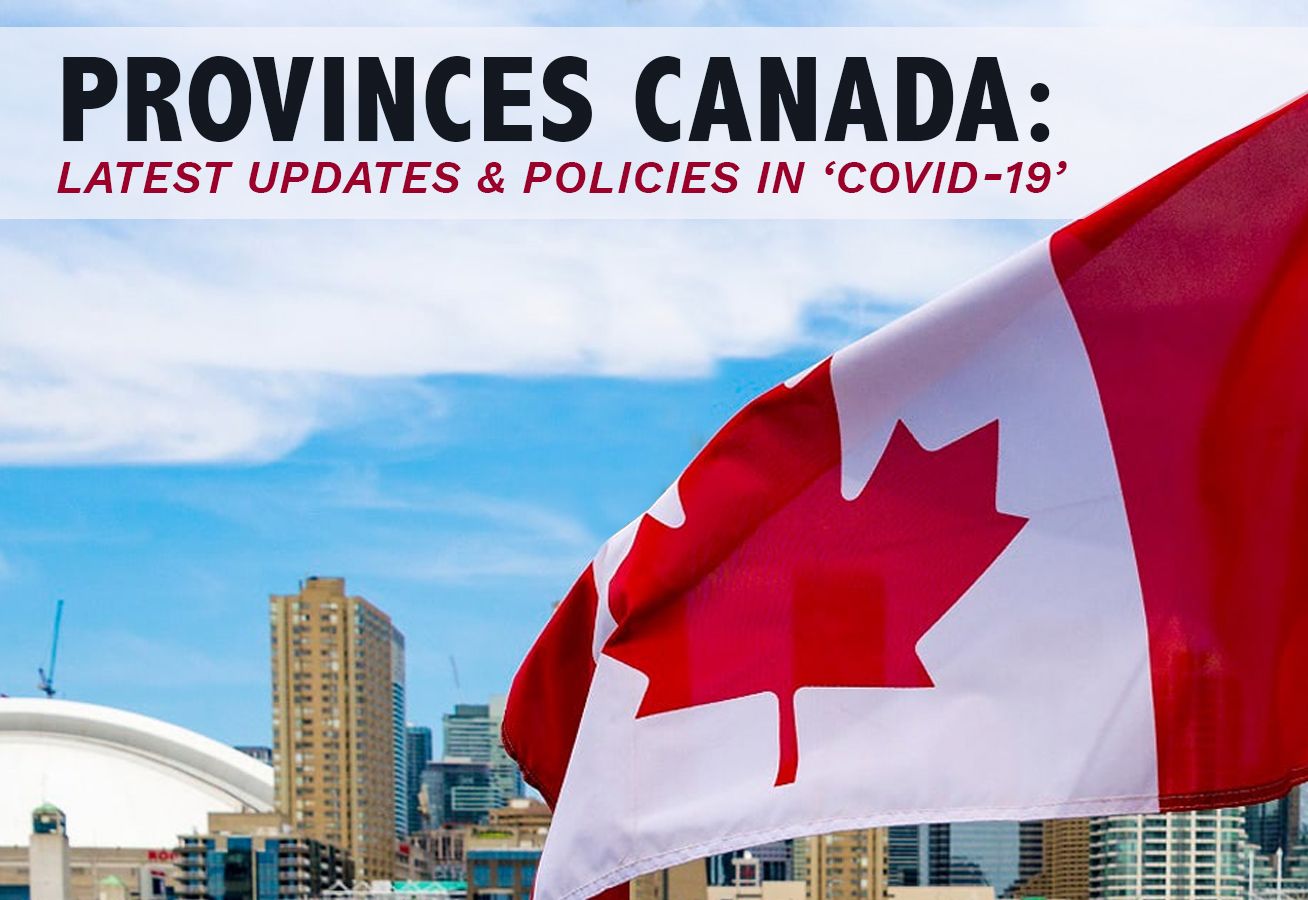 Canada, a huge country i.e. second in number area-wise. All the provinces have a provincial Govt. and a capital city. Although, the country has a bigger size than the USA. To manage Canada properly and helping in governance. The country is provincially divided i.e. into 10 provinces. All these Canadian provinces have been taking policies & measures that are highly valuable for the prevention of COVID-19. There are casualties as well as a huge number of regd. cases of Coronavirus in almost all the 10 provinces, which are huge in their area.

The Canadian Govt. is trying its best to impose strict laws. These include travel restrictions so that they can fight against COVID-19 in the best possible way. Some of the provinces have their borders with the USA as well. A country that is most affected by COVID-19 in terms of deaths. The USA also has the most number of cases regd. till date. However, the Govt.’s policies are subject to change according to the conditions of COVID-19 in Canada.

The Food Banks BC will distribute the money to food banks province in order to distribute the food. Also to pay the employees and cover the essential costs for the delivery of the food programs.

Alberta is one of the provinces that has seen the effects of COVID-19 on a higher side. Prime Minister Justin Trudeau announced $9 million in funding through United Way Canada. This funding is for the older population in Calgary, one of the biggest cities in Alberta. This funding will help the old people in getting their daily use grocery amid COVID-19, their medication and other items of use that are highly critical and important.

One of the major policies by Prime Minister Justin Trudeau for the old age citizens showing the love, care and respect Canada gives to their senior citizens. This is in light of the rights of senior citizens of Canada and their mandatory requirements. In addition to this, The Prime Minister also introduced funding for the kids. A ‘$7.5 Million’ funding to the kids help phone is a huge step by the premier as a measure of the children’s rights and rights of minors in Canada.

As part of the travelling measures & policies introduced for Alberta province. The authorities have imposed a denial on domestic flights for travellers testing positive with COVID-19 as well as for intercity passenger trains. Apart from these measures, the Govt. has introduced some strict regulations for social distancing and public gatherings. The govt. imposed a restriction of a maximum of 15 people for a public gathering in the whole of Alberta. This also includes those who are organizers of the gathering or an event. The breaking of rules even for a time being shall result in fines being imposed. People will have to abide by the rules imposed by Govt. of Alberta until next notification for COVID-19. A piece of good news according to a news conference said some relief for renters as they can now relax with rent payments until notified further.

Some more measures & policies in the Province regards to the social distancing included a ban on vehicle access to the provincial parks and recreation areas. The Govt. has also imposed restrictions on sports taking place in the province especially Calgary. A ban imposed in Calgary, mostly a student’s city, with a ban on all kinds of sports including leagues. These sports included cricket, baseball, basketball, Frisbee, and football. Organized tournaments or sports activity or an informal one, doesn’t matter according to sources. All come in the same category for the provincial Govt.

Govt. of Alberta also announced that in Calgary some roads shall be closed for cars. This is for free space for pedestrians and cyclists. Some reforms were also introduced for farmers as part of disaster management & control. Hence, these are in the form of funds known as additional disaster funds for the affected ones due to COVID-19. This is a provision as part of the agricultural reforms regards to COVID-19. As Canada is a country of farmers and peasants since its mediaeval times, the reform for farmers is a huge step in these current times of Coronavirus. In addition to other day-to-day activities, farming and agricultural activities have been also been affected in Alberta.

Ontario is one of the largest provinces in Canada and Toronto the largest city of Canada and largest metropolitan in Canada. A mega total of 18 firefighters were tested positive in Ontario, including six from the capital Toronto. These are the latest figures and are not good for the safety of Ontario in terms of Fire & Safety i.e. a vital branch of the high-rise buildings Ontario. As the physical distancing measures are being increased in other provinces in Canada. Ontario Govt. has designed a 5 person limit to follow physical distancing and prevention of COVID-19. Some added measures and regulations include those for the construction industry for sites in the province of Ontario. Apart from physical distancing measures. COVID-19 is responsible for more improvisations, measures and instructions in Ontario province due to a daily rise in disturbance levels.

For the pedestrians testing a clinic, the facility has been opened. Cote Saint-Luc is the place in Quebec where the clinic is opened and active for testing. The clinic used is at Place-des-festival instead of its earlier location. Other measures taken all over Quebec especially in Quebec City include travel restrictions in some key areas imposed by police via police checkpoints.

For the sake of physical distancing in Quebec, the Govt. has released instructions that are available in at least dozen of languages which includes Arabic, Creole, & Yiddish. Apart from many languages spoken in Quebec Province, the French language is the second most spoken language after English.

The province of Nova Scotia has also imposed travelling restrictions and strict guidelines while travelling. People who have travelled outside Nova Scotia needs to self-isolate for a period of 14 days from the day they get to the province. This is a strict implication by the Govt. of Nova Scotia even if there aren’t any symptoms to people. Those who are potentially ill with COVID-19 will need to fill an online questionnaire in order to determine if they need to call 811. This is a telephone line for people who are having the symptoms and need immediate assistance.

This is an announcement from the Govt. of Prince Edward Island of $2 million in support of the early learning centres, the staff and parents. The support measures and policies are for families so that they don’t have to pay while centres are closed. This funding covers the 6 weeks period and in addition extra time until the virus effects are active in the provinces of Canada.

Another announcement by the provincial Govt. is of $500,000, as relief package. This includes money for the United Way food banks, the Salvation Army and helping the organizations.  The innovation PEI is providing the self-employed islanders $500/week. A remuneration package for the self-employed in the times of COVID-19 as financial support.

The pandemic has influenced many small businesses in the province. Hence, they are eligible by the Govt. for loans up to $100,000. In addition to the Govt. WSP or Wage Subsidy program, there is the eligibility for hourly workers. The eligibility is only for those with reduced working hours due to COVID-19 of $200/week allowance. There are many people who work on an hourly basis, that includes, Construction workers, Bus Drivers, Security Staff, Govt. Workers, technicians, plumbers, electricians, and many other especially in the services industry in Prince Edward Island, Canada.