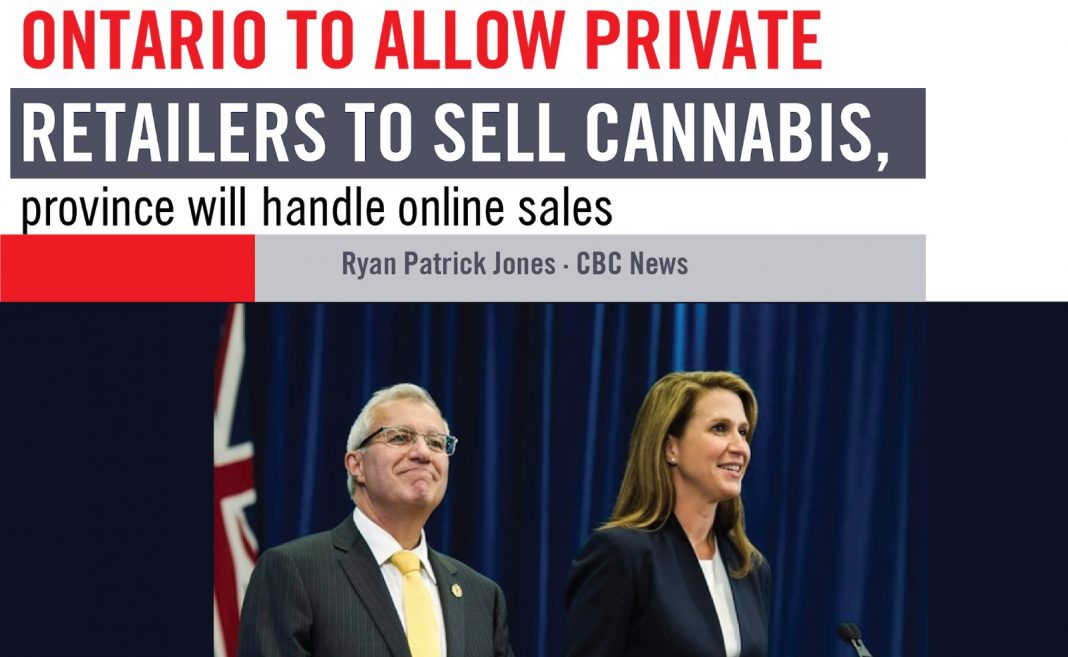 ONTARIO’S MINISTER OF FINANCE VIC FIDELI AND ATTORNEY GENERAL CAROLINE MULRONEY FOLLOWING AN ANNOUNCEMENT ON ONTARIO’S CANNABIS RETAIL MODEL, IN TORONTO ON MONDAY. (CHRISTOPHER KATSAROV/CANADIAN PRESS)
Ontario’s Progressive Conservative government will develop a private retail system for recreational pot sales by April 2019. Minister of Finance Vic Fedeli and Attorney General Caroline Mulroney laid out the government’s plan for a hybrid system in an announcement at Queen’s Park, stressing their priorities would be ensuring public safety and eliminating the black market.
“The government of Ontario will not be in the business of running physical cannabis stores,” said Fedeli. “Instead we will work with private-sector businesses to build a safe, reliable retail system that will divert sales away from the illegal market.
” Starting Oct. 17, the province will introduce a system for online sales through the Ontario Cannabis Store (OCS) to meet the federal government’s requirements that provinces be ready for retail sales by that date. The government will then launch a consultation process with the aim of introducing a private retail model by Apr 1.
The proposal scraps the previous Liberal government’s plan for a provincial monopoly on cannabis sales that would have seen the government operate 150 brick-and-mortar stores by 2020. Under the new plan, the Ontario Cannabis Store will not operate any storefronts, but will provide an online channel that will include an age-verification system to ensure safe home delivery of cannabis products.
The OCS will also act as a wholesale supplier for private retailers. Fedeli said the government will propose creating an official Ontario Cannabis Retail Seal which will help consumers identify stores where federally qualified cannabis products can be found.
“Consumers can look to this seal to confirm they are buying from a legal channel,” said Fedeli. “This is an assurance that the illegal market simply cannot match.”
Changes require new legislation Setting up a private retail system will require changes in legislation to the Ontario Cannabis Act of 2017.
The key elements of the act will set the legal age for the purchase of cannabis at 19, ban the use of recreational cannabis in all public places and workplaces and prohibit those under the age of 19 from possessing, consuming or cultivating the drug.
The province says it plans to address illegal selling — that includes storefronts that currently operate in cities across the province. Fedeli stressed these dispensaries remain illegal.
“For those engaged in the underground [cannabis market] today, our message is simple: Stop,” said Fedeli.